Whew, it was a long week! Our visas for Israel were due to expire on February 1st and it was going to cost close to $400 to renew them 'over-the-counter' here in Israel, without having to leave the country. So we thought we'd kill two birds with one stone so to speak and take a trip into the neighboring country of Jordan, see Petra, and get new visas while we were at it.

We had thought at one point to make the trip down to Egypt, but with the turmoil there, the border was basically closed to Americans. We'd heard the US Embassy was trying to fly Americans out of Cairo all week and thought that probably was not the safest choice at the moment. 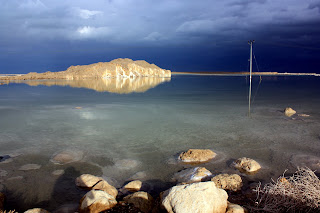 We left Sunday, around noon and spent the afternoon wandering along the Dead Sea, stopped for pictures, and  making our way to the beautiful seaside city of Eilat in Israel. It sits at the very peak of the Gulf of Aquaba, between Israel, Egypt, and Jordan/Saudi Arabia. We ended up staying in the van (long enough story for another blog) and 'camped' right next to the Red Sea. When we arrived
and were setting up beds, someone had left a fire burning in a barrel, so Lily and Zoe were thrilled and were scrounging around the beach for anything to throw in. Not finding much and it being late, we all wanted to get the cramped night over with and we tried to go to bed.  It was a long night, and a bit ironic as the smallest person, Miles, slept the best. Rachel had him on her 'couch?' and he was quiet and snoozing all night. I know this because I was up almost all night trying to get comfortable in the front seats. I wanted to dream of a large comfy bed, but the problem was I couldn't fall asleep to get that far! 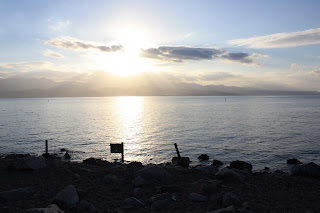 It was all worth it in the morning when we were greeted with an amazing sunrise over the Red Sea and the mountains of Jordan, and after a filling breakfast of yogurt with...........yogurt, we were off to the border.
Getting across was pretty straightforward, although we were hit with 100 sheckels ($28) per person for a border tax :( The savings for this little adventure were disappearing rapidly. I kept reminding myself this was not to save money, but for the experience......this reminder would become like a mantra over the following days. Once across, we realized that there is NO public transportation from the Jordan side to the town, taxi only.........here we go!.....refer to mantra ;)