While Erik's parents were here, we made a trip to "The Cave of Machpelah" or Cave of the Patriarchs. It is in the West Bank, and not the safest place in Israel over the last few years!

On the way there, we passed about three different checkpoints, and all the bus stops along the highway there are behind concrete bunkers. Apparently, waiting for the bus denotes a crime in this area and people have been picked off while waiting. All along the highway is barbed wire and fencing, and the whole trip south feels a bit like you're driving in a war zone, which for many years, it was.
Getting into Hebron itself was fairly easy, after driving through 2 checkpoints, you enter an arab side of the town. What a difference! You leave a newer area of Jewish construciton, and enter a 3rd world feel of the arab side. I can't tell if it's because of all the conflict, or if Israel is limiting goods going in to that side, but it's a very dramatic difference.

Once we drove down (it's in the lowest valley of Hebron) you see an amazing structure. It is the 2nd holiest site to Jews, second to the Western Wall, and in fact was built by Solomon in the same style as the Temple Mount. Because it was 'only a tomb' instead of a Temple, it wasn't razed by the Romans while they were here in the first couple of centuries CE, squashing everything else in sight. So, it is an very accurate on the detail and style of the way the original Temple Mount looked.
The tomb itself holds (to tradition) the tomb of Abraham, Sarai, Isaac, Rebekah, Jacob, and maybe, Esau? It has two entrances, one for Jews, up a small staircase, and through a hallway, and another around the main side through a Arab neighborhood, and through a mosque.  From the Jewish side, you can see all the tombs except for Isaac's. Ironic, since the line of Arabs went though Ishmael, so why do the Arabs want control of Isaac's? (except for the simple reason the Jews want it) I asked if I could go around and see Isaac's tomb, and was told, "Yeah, if you go though the Arab neighborhood.....go in and though the mosque.....and climb up to the tomb, yeah, if you make it that far, you can see it."....hmmmmm.......nevermind.!

To give you an idea, if you look though the tomb of Abraham, there is one small section that you can see across and into a hallway of the Mosque, and it's this small section that has a piece of bullet-proof glass. Just in case someone wanted to take a shot across from one place of worship to another. Craziness.
We were the only non-Jews or tourists we saw while we were there and it didn't seem like it gets the big tour buses very often. So, it was a very unique "tourist site" and we were glad we made the trip, it was a fantastic experience!
See you soon!
~Hems
1 comment:

What a week! This week (well, the last couple of weeks) is holiday time here in Israel. So, it's been really cool to see how everyone prepares for it. The holiday season builds up to a week long holiday called Sukkot. It is celebrating when the Israelites left Egypt and ended up wandering in the desert for 40 years. During these years, they lived in tents and moved as God directed them, so in rememberance, everyone sets up small shelters on their patios, decks, yards, pretty much anywhere you can fit one! The Bible commands His people to continue this celebration and to eat at least one meal per day in a "sukkah" So, you see almost every restaurant set one up in front of their place and they are usually packed until the wee hours.

We built a sukkah up on the roof of the apartment and spent a few evenings in the breeze, enjoying some wine, olives, hummus, and cheese......really nice!! Emma and her friend Yonit, spent the night up there one night and got more than a few bug bites! We had a lot of visitors here at 'For Zion's Sake', 6 ladies from Russia, a girl from Switzerland named Anita, a lady from Poland via Australia - Asha, and another lady from Australia, Suzi. Plus with my parents, it was a full house(s). Everyone was flexible and even though some people wound up on the floor, it was a good time. 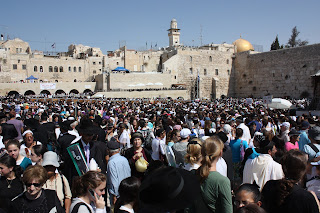 The week builds up to "The Blessing" by the head Rabbi at the Western Wall and everyone who has mad pilgrimage is there to hear the blessing. We went down to see the crowds and it was packed! There were an estimated 50,000 jammed into the big courtyard, and stacked on every stairway and upper patio all over the complex. It was exciting being there and very intense at the same time. My dad and I ended up helping some people who were handing out water bottles and glasses of water because it was roasting hot that day.
Afterwards, we wandered into the Arab Quarter to dine at the legendary 'Green Door Pizza' a favorite of backpackers for years because it's cheap and rustic. Quite a place.....the guy works down in this pit in front of a wood oven, the walls are all black from smoke stains, and he makes the pizzas with tomato sauce, soft cheese squares, and cracks two eggs on it, mixes it up and throws it in the oven. Definately worth the experience! Josh, someone who came with us on the adventure, couldn't get enough and ate almost 3 himself. You're an animal Josh!
Quite a day!! Quite a week! It was really awesome being in the land for it and we all had a ball.
Until next.......Hems
2 comments: