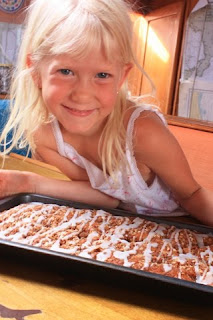 Don't know about you guys but we love to have a really yummy breakfast on saturday mornings. Usually that means me making something the night before. :)

A few weeks ago I had found this recipie for a coffe cake and have been dying to try it out. Everyone asked if I could make something for Saturday morning so I put two and two together....and ta-da! The bottom part of the cake tasted somewhat like a sugar cookie and the crumbly top is made up of brown sugar, oats and butter. The icing on top was my own addition...I thought it needed a little MORE sugar ;) 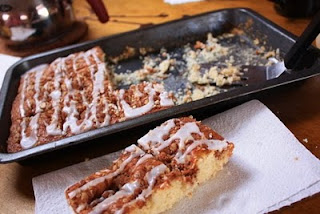 Everyone liked the cake so, sorry there's none left over. (Talk to Levi who cleaned the pan!) But I hope you can still enjoy the pictures! :) Unfortunatly all this cooking means lots of dishes so off I go.....


Til my next 'Goodie' comes,

We got to Cyprus almost a week ago, hanging out in a town on the East corner called Larnaca. It's big claim to history fame is this is where Lazarus from the bible died. There are also tons of signs from crusaders and turkish influence, Again, another piece of property too ideally located not to be fought over (and over and over!) 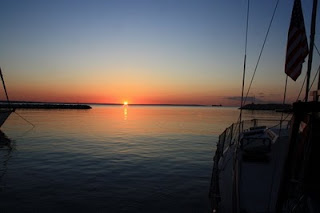 So, we thought we were only going to be here a day or two and then off to Greece, but winds said otherwise. We had a REAL rough passage from Israel to Cyprus and we were all a little gun shy getting back to sails. That, and it's been 6 days of direct wind from the West. 12-20 knots. Not the wind you want when you're heading West! So, we've had a chance to get some boat projects and school caught up.
The autopilot started making a funny noise as we were getting here, and I thought "oh, I'll just take a little look in there and see if something looks out of place"...... bad idea. Levi watched as I pulled it apart and little gears bounced around in the cockpit. ooops! Curiosity killed the autopilot! So...... we found someone on town to rebuild the gear box, and 150euros and hopefully a little wiser for the wear later, we're back in action.
All is not lost, we've found a few cool things here in Cyprus while we wait. Levi found some good skating grounds and guys to skate with, something he hasn't been able to do much of since we left. Also, we've had a chance to ponder where we're having the baby and all those details!
Nothing in concrete yet, but feeling like Israel is the best option as all the family can be there to be a part of the birth. We decided months ago, this year won't be so much about sailing, but bringing our new little guy in the world safely!! After that is completely up in the air, maybe Red Sea, maybe????
So, that being said, we're still trying to get to Greece for a month of island hopping before heading back to Israel in July to get ready for the baby in September! Turning out to be a busy year after all, who says floating around on a sailboat is easy? It's a lot of work!
That's the plan this week, we're hoping to head towards Paphos tomorrow and off to Greece on Tuesday! Hopefully the wind reports are accurate!
Hems
No comments:

one last hurrah in jerusalem

We were scheduled to leave the marina in Hertzlyia, and Israel in a few days :( and had one last day free to head into Jerusalem. So, Maggie and Levi and I went into the big city to explore while Rachel took "the littles" to the beach to relax.


We decided to try and take the train from the coast which turned out to be the way to go. It was cheap ($13) for a one-day round trip ticket to Jerusalem and back. The train took about 2 hours as opposed to 1 1/2 by car, so not bad there, and the trains are really comfortable. So we got to relax and goof around instead of being stressed in traffic! Good by me! When we got to the last train station, it ends at a huge mall we moseyed around in it for a bit. It has all the global stores and is as big as any mall in the states. 3 stories of consumerism and a food court! 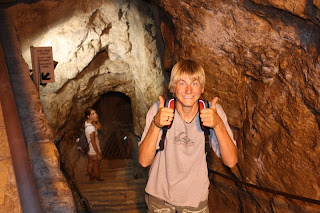 One thing I really wanted to try and do while we were here was a hike in the City of David. It's next to the Old City of Jerusalem and includes "Hezekiah's Tunnel" from the Old Testament book of II Chronicles. It is a hand-dug tunnel that archaeologists still marvel at for it's engineering and accuracy. Two groups started digging from opposite sides and miraculously, met in the middle with only 6% grade for almost a kilometer! It was a hugely strategic water supply for the city and is still a running spring 3000 years later! So, we taxied over and hiked it, it was amazing! The tunnel goes for over 1/2 mile, pitch black, and at times the water is up past your knees! They sell little l.e.d. flashlights for a buck, otherwise, we would have been groping around for quite a while. It was fun thinking of all the soldiers and people who had been there over the centuries and we turned off the lights for a stretch, bonked our heads in the dark to get the full effect.


Afterwards, we feasted on what might be our last falafels for a while, shopped a bit in Old Town for some souvenirs, and moseyed our way back to the train station that afternoon. Part of us didn't want to leave and we took our time wandering around the Old City.


We ended up catching the next to the last train home and didn't get back to the boat until almost midnight, a long and fun, but exhausting, day.


Tomorrow is top off the water and fuel tanks and make ready to sail up to Cyprus and then off to Greece. We're going to miss Israel and are looking for an excuse to stay! 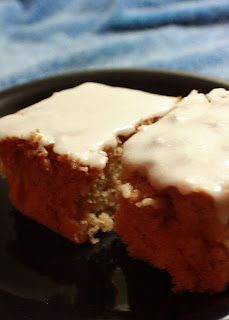 
Wow, what a trip this has been. We have seen so much here in Israel its hard to remember we have only been here for almost 3 weeks. Time seems to fly!


As we have been busy sight-seeing I haven't been able to get to baking to much lately. But Friday night I was craving something sugar-y so I looked through my cook book and came across the spice cake recipe!! And that's where my looking stopped! ;) 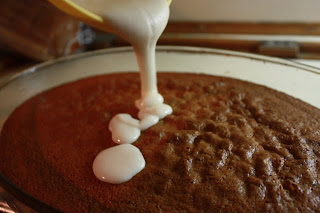 
Another blunder! We thought 3 weeks in Israel would give us enough time to see all of what we wanted to....but NO way! There is so much to explore, it would be a full time job for months to put a dent in it. We've been very busy in Israel the last 2 1/2 weeks, so here goes: 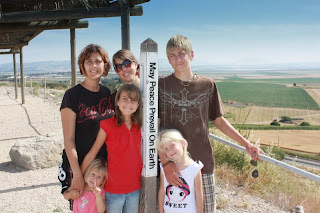 We were first in Haifa for a week in a marina which is not located very well, and I don't get the impression a lot of cruisers go there. It's out of town and not accessible by any public transportation, so it's either a LONG walk, or rent a car. We opted for the rent-a-car method! We drove all around the north part of the country, Nazareth, Tiberius, Capernaum, Se of Galilee (Kenneret), Megiddo and megiddo valley (Armegeddon) photo above, Akko (an ancient seaside port) and had a great time. Israel really is an amazing place, but it needs a long time to sink in. The contrast of all the history, along with all of the struggles of the people here and the land itself, then mix in all the modern things bursting at the seams here, and it's just a lot to sort through.
Someone told me about a street that was torn up and while they were excavating, found the most complete mosaic Roman floor known, in the world. So construction was delayed, photos and tests taken, then they put tarps over it, and buried it back up, it in an intersection with thousands of cars over it now! Just a day in an ancient city!
Some of our highlights from the north were: rafting trip down the Jordan River, seeing a 2000 year old boat found in the mud by Caperneaum (who knows??) just hanging out by the Sea of Galilee, throwing rocks, eating felafel's, pita bread with hummus (amazing!) and schwarma, a meat sliced into a thick tortilla with salads and sauces, messy, but fantastic.
After a week in Haifa, we sailed down to a marina just north of Tel Aviv called Hertzlia. It's very new and has room for almost 1000 boats in the water and a new mall and apartments built around the marina complex. It's always busy, especially on weekend! Boats are coming and going all day. Good place to be based in, because we were able to catch buses to Tel Aviv and shopping, although we also rented a car and spent several days in Jerusalem and drove to the Dead Sea. 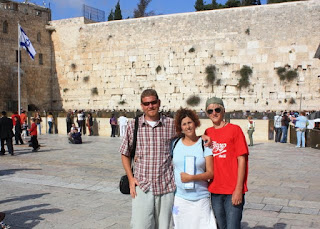 Highlights in Jerusalem were Yad Vashem, the holocaust museum (could have spent 3 days just there), the Old City of Jerusalem with the Western Wall, streets, shops, churches, pretty much everything! Just being here is a very cool feeling with all the history, but it's also amazing to see how the mighty hand of the LORD has saved this land for Himself and how He's rebuilding it. It's really incredible to think that all that's been accomplished here has only been in really 60 years, since Israel has become a state again.
We're tempted to stay here and just mold into the country, but we know time is coming for us to move on.....back to Cyprus and then on to Rhodes. A couple of long sails coming up, so now we're doing laundry (cheap laundry mat, yeah!!) and food provisioning. We broke the bank filling up the pantry, refrigerator and deep freeze for the over-nighters we have next week. Until then......Miss you all!

We started posting photos on a 'web album' You can go anytime and view it at: http://picasaweb.google.com/ErikHem