We're in Senegal! after a week long sail. It was exactly 7 days, almost to the hour. The total trip was almost 900 miles and we had pretty good winds. We we're able to sail almost the whole way, and only had to run the motors a few hours a day to keep the batteries full. For several days, the wind was coming directly behind, and we put out the sails and only had to move them twice in 7 days. Quite a difference from the MED, where the winds seem to shift hour by hour.

Lily and Emma spent the first 3 days working on cross-stitch projects, then switched to coloring and making wooden puzzles we bought for passages. Most evenings, while we were charging batteries, we took the laptop out and watched a movie, while we took turns jumping up and checking for other boats. There was a 3 day stretch where we didn't see anything, pretty lonely.

The nights were spectacular, no moon, and zillions of stars. There was also a lot of phosphoresence in the water, and it often looked like a glowing trail as we went, amazing. Levi and Maggie and I got into a rhythm, taking turns for night watches, keeping the sails trimmed, and watching for other boats.

Emma and Levi spent yesterday on the final approach to Senegal making our courtesy flag, out of some scraps we found on the boat. A little sewing and coloring a star and we're 'official'!

We're waiting here for some friends on another boat and we're planning to sail to the Gambia river together. We're sending updates from a satellite phone because internet is really hard to come by.

Hello from West African Coast -
We're on day 6 of 8, making our way to Senegal. We've had some strong winds in the 20-25 knot range for the last 2 days, meaning the seas are also quite rolly :(
Everyone is hanging in there, literally, trying to cope and doing crafts inside. Maggie, Levi and Erik are on the night watches, and haven't seen a ship in 3 days, pretty lonely out there!
We'll send a note once we arrive in Senegal, should be by Wednesday morning, or sooner would be OK too :) Thanks everyone for the prayers, please keep praying for us.
~ Hems
1 comment:

We're all very thankful for this chance to travel as a family and hope your thanksgiving is filled with memories :)

Erik - An amazing family. For sun, wind, and sea!
Rachel - God's safety and protection and my family.
Maggie - The best family in the world, my awesome boyfriend, and seasickness pills :)
Levi - Foul weather gear and new challenges on the horizon.
Emma - Mehari, a big pile of crafts, and family.
Lily - God's keeping us safe on this passage, and barely anybody is sick.
Zoe - My stuffed dog 'Max' and dad and Levi stayed up all night, keeping us safe.
Miles - My blanket and dee-dee (pacifier)

We made landfall in Graciosa, a little spec of an island on the northern end of the chain of 7 islands that are the Canaries.

The Canaries are technically part of Spain, but certainly feel like their own world, and the people are quick to explain that they are Canarians first, Spaniards second. The islands on the east side, are all volcanic and look like the surface of the moon, very stark and very little vegetation, but beautiful in a unique way. A lot of vistas and mountains look a bit like Arizona, where we are from, but with the added bonus of being surrounded by a gorgeous blue sea. 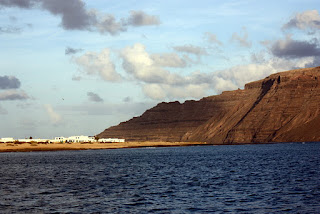 Graciosa is a sleepy village with sand streets and low, white washed houses with large porches for staring at the sea. It has a collection of a few hippie folks who came to visit from around the world and apparently never left. There are 3 little markets, and it takes visiting all 3 to collect what you need, but a fun undertaking, nonetheless.

The wind was quite strong for several days, and the anchorage we were at was not the most comfortable, but we toughed it out and then headed south to the next island, Lanzarote. We wrapped around the bottom of the island, another 35 miles south, and anchored in a bay right outside a marina, and next to a large resort town called Playa Blanca. We met up with some friends, on Begonia, and Imagine. Begonia was heading west to meet friends on another island so we hung out for almost a week, working on boat projects and getting things ready for the crossing. We rented a car one day and drove to the other side of the island where there is a large, inexpensive grocery store, and we did another provision for the next few months. It takes a staggering amount of food and planning to feed 8 people and try to predict what well need the most of.

We then sailed to the next island, Fuertaventura (big adventure) and found a great village called Gran Tarajal. It is neatly manicured and every planter is cleaned and raked everyday, a very clean place. As an added bonus, the town marina is the cheapest in the Canaries, something every cruiser is ALL about, so we relaxed for a few days. We had a sail repaired in the marina from a guy living and working on his boat, and as the crossing is starting to loom, feel like we’re getting things in order. We’ve also spent a lot of time researching the right medication for Senegal and Gambia, both malaria prone areas, and getting things like mosquito nets for all the beds. 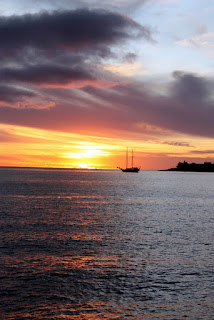 We’re excited to see Gambia and Senegal, but part of us is wanting to get on to the crossing, as the anticipation seems to just keep building and building. I’m sure we’ll be really glad we went to west Africa, and there really is no better way to see it than from your own boat, I mean, when else might we be in this part of the world with this amazing opportunity?

We’re moving on toward Dakar, Senegal in the next few days. Again, our longest passage yet, 800 miles and about a week at sea, and almost ½ as long as the passage across the Atlantic. The Atlantic crossing will be approximately 2000 miles. Baby steps, right?!

If we don’t post again before we leave, we’ll see you from Senegal!

By the second day, we were well clear of the coast and the fishermen, and all the other boats we’d left with were nowhere to be seen.  We were trying to get in our groove, and the wind was fairly steady out of the north so we settled in. It takes a couple days before your body gets adjusted to the constant motion and no one on our boat had any appetite, just trying to get though the first days and into a routine. 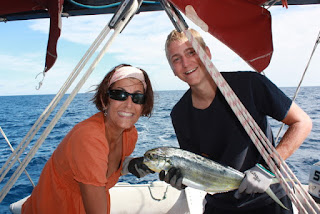 The good news, we finally got all of our fishing gear sorted out in Gibralter and picked up some proper lures for Atlantic fishing. Levi also got some lures as a birthday gift from the crew on Imagine, our friends on another sailboat. We were anxious to try them out and so we dropped a hook and let is troll about 50 yards behind us as we went.  5-6 hours later, we heard the reel spinning and had a fish on! Finally! Levi worked it for a while and let the fish tire himself out and reeled in a beautiful blue fin tuna, not huge, but plenty for our family.

We were all really excited to grill it, so we cleaned it and soaked the fillets in sea water for a bit before we threw it on the grill. All it needed was a bit of lemon salt, and several minutes on a hot grill, and it was done. It really perked everyone’s spirits and it was delicious! We all ate every scrap of the fish and couldn’t wait for the next one.

The next fish came the next day, and the day after, and we ended up catching 3 on the whole trip.  I’d let the reel out when I woke up at 7 in the morning and by 10, we’d caught another tuna, and we’d grill it up for a late lunch. It was a fun few days, living on the bounty of the sea and we thought this was a pretty cool way to live!

We were able to stay in Morocco for almost two weeks, and it was time for us to head south to the Canary Islands, the next stop for us. The situation of the marina in Rabat is a very narrow entrance from the ocean, and it has a sort of criss-cross of sand bars that are very shallow at low tide, and with any sort of wind pushing a ‘swell’ eastward, makes the entrance difficult or even dangerous to enter or leave. Often, the marina will close the entrance and boats are not permitted to enter or leave. 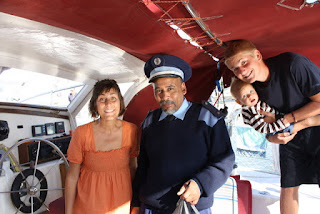 So, with this scenario, there were a lot of boats, like us, wanting to head to the Canaries.  So, when the weather finally showed a window that was OK to leave, they ended up with 22 boats all scheduled to leave the same day!  The customs office, and passport control people, etc., had a very busy day checking everyone out of the marina and the country.  They wound up going from boat to boat throughout the marina and checking us all out one by one instead of everyone going to the office and overwhelming them.  It worked out pretty smoothly for a country and for officials who don’t normally like to bend the rules, and of course LOVE stamping papers and things.  So, they brought the ‘drug dog’ around and he climbed on everyone’s boat, sniffing for illegal stuff, while the officers were clambering around, sorting out the documents.  All in all, it struck me as a pretty funny sight. These guys did not look at all natural in their suits and ties trying to climb over scruffy boaters, all waiting on their decks and just wanting to leave.

The whole process took about 3 hours and we were off, at around 4:00 in the afternoon, and although the swell had “died down” from an off-shore storm a few days earlier, there was still a pretty large roll waiting for us as soon as we headed through the entrance. I could understand why the marina was cautious about letting people leave, as we plowed over some big waves and having to time it just right so they wouldn’t crash on our decks. Once we were past, by several hundred yards, the sea calmed down a bit and although the swell was still 3+ meters, it was a more gentle roll and not breaking.
So………we were off for our longest passage yet, just over 500 miles, and our first real introduction to the Atlantic Ocean. We’d heard from a lot of other boaters,
Read more »
1 comment: