It has been a busy few weeks, with Levi and I working 50+ hours a week, working to finish details on the fishing boat(s), but no excuses! I know some readers are wondering what we've been up to, here in Alaska.  There has been an endless list of things to prepare and fix. I mentioned the net mending in the previous post, and all is well, nets are mended and on the boats. 1/2 mile of net is a LOT of net (not to mention it weighs about 5,000 pounds dry.....more when it's wet!) There have been loads of other projects as well, but it seems we have gained on it, and the list is finally short. 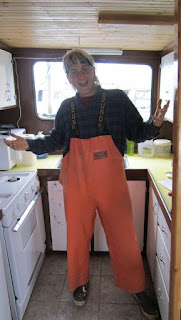 One of the chores to get ready was an all day trip to Anchorage (Erik and Emma) and filing 6 carts with enough food for 2 1/2 months' long season. We're planning on being more than a little hungry after fishing all day, so we need our 'sustenance' :)   Most of the food stays in Homer, and when we need to re-stock while we're out there, Linda sends it with the fish tenders that come and go from us, bringing our catches to the fish processors. The tenders are huge ships that literally vacuum the fish from our boat (sometimes straight from the net) into their hold and make the 10 hour trek back to town. So we can just keep fishing!

So, we are planning now to leave the day after tomorrow, and are heading out to an area on the way to Kodiak Island, about 10 hours from Homer by boat. It should take us one overnight trip and then we'll be waiting for the schools of fish to start "running"....schooling back to the same creeks and rivers where they were spawned 3-4 years ago.

Levi and I have been like sponges, learning everything we can about the whole process, and are excited to see the boats start filling with fish. We get paid a percentage of the season's catch.....so the joke is: NO fish will escape on our watch!!

Meanwhile......Miles and the girls are enjoying a bathtub at their disposal!

Well, we've been in Alaska for a bit over a week now, and we're still getting our bearings! The strangest thing is the sun not going down until after 11:00 pm, so it never really gets dark before the sun is coming up again. It's been difficult for the kids to adjust because they don't want to get in bed when the sun is shining in the windows!

Levi and I have been working a lot getting the boats ready for the season. This means everything from mending nets, to welding, to framing, to plumbing, to cleaning, to painting, to siphoning old fuel from last season, and on and on. We thought Mehari was a lot of work! These fishing boats are MUCH larger, and have way more systems than we have on our little sailboat.
The main boat we'll be fishing on, called 'Stardust', is 58', sleeps 10 and has a 550hp diesel motor (Mehari has 2 motors that total only 36hp!!)
It also has a sea water chiller, for keeping the salmon we catch and store in the fish hold down to 33 degrees (chilled seawater.......fascinating) and two separate diesel generators as well. It has an engine room as big as the saloon on our boat, and it's nice to be able to walk around everything instead of trying to turn a wrench.....crammed into a "phone booth". The boat also has 1/4 mile long fish net that we use which weighs over 5000 pounds.....without fish! So, as you can imagine, everything on the boat is BIG!

The "fish hold" is below decks and can hold about 60,000 pounds of fish and we hope to fill it as often as possible! Well see. We're still about two weeks from fishing, and everything is totally new for us. If we get our projects finished, we hope to go out for some practice 'sets' before the official opening of the season so we can at least LOOK like we know what we're doing.

Rachel and the kids have been settling in as well. The have been into Homer a few times, poking around town and are already set up with a library card and have been there a couple of times. It's a great way to have a free outing and the kids like getting a new stash of books for home. Emma is into craft books and readers, Lily has just started getting into readers, Zoe likes picture books, and Miles is happy with any books with cars. Maggie if course, just gets a pile and devours them quickly. She's just happy for some more variety than the books that get passed between cruisers.
No comments:

Well, we thought the BOAT had it's hard moments! Whew! Road travelling with 8 is tough. 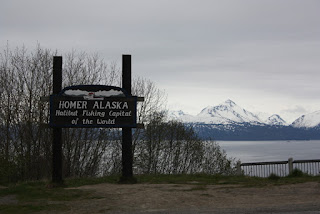 Most of the photos we put on were of us smiling, but there were a lot of not smiling times. All in all, it was a great adventure, and we lived to tell about it. Actually, I'm mostly joking, but it is what it is.
It is just difficult with all of us, some as large as adults themselves, in a car....any car, for 12-14 hours at a time. The best solution we found was to drive all night. Not much fun for Rachel and I, but oh well, better in the end. 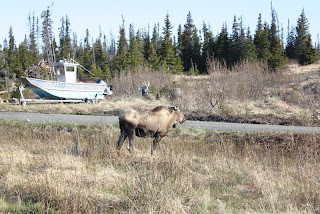 We arrived several days ago, and are just getting settled into our new routine for the next few months. The house where we are staying is gorgeous. The people we are fishing with, Mark and Linda, kindly offered to let us all stay, knowing Levi and I would be gone most of the summer and it would be Rachel and the kids here with Linda. It is a big house with stunning vies over the Kachemak bay, just up the road from the town of Homer. They are on 5 acres, and the first morning after we got here, I went out to get something from the car, and there was a moose in the front yard, munching away on the grass.......welcome to Alaska!

The house has a big loft room where all the kids will sleep, and Rachel and I have a room downstairs with a bathroom. We're all adjusting to all the space, and it's going to be interesting to see if we can cram everything back into the suburban and trailer when it comes time to leave. For now, we're just enjoying the time we have here and enjoying God's amazing creation that is all around us! 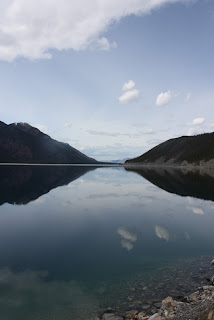 While we were driving through Canada, we saw a huge lake with ice all along the edges. Naturally, we had to stop and play with the ice and fill our ice chest! Here's some photos: 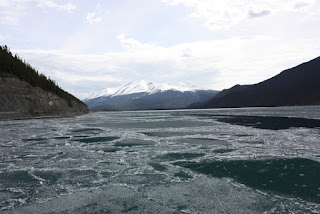