We've been busy the last couple of weeks since mom and pops left :( We had a great visit with them and a lot of tears were shed when they left, again. They were encouraging about this adventure we've taken, and it helped them to see where we are, and what we do. We also got a great day of sailing here in the bay which was a perfect day. A little overcast and a 20-25 knots southerly. Because the bay is so huge and sealed off from the open Mediterranean, the water was comparatively flat for that much wind and we were zipping around at an average of 6+ knots. Fast for us.

Now, it's back to reality, and the reality is....we're leaving the comfort of the bay and the marina in a matter of weeks!! Time to get finished all the projects we've wanted to complete this Winter. Things like filling in the back deck with wood where a ladder used to be, new wood shelves in the bedrooms (when it comes to storage on a boat, the more the merrier!) Re-finishing tables, changing out the wind gauge at the top of the mast, etc. etc.
We were able to extend our Marina contract until the middle of March, which by then we'll head out to the bay and anchor if the weather is still not good, or head on down the coast if it is. We've also been deciding what direction we want to venture off to this year, keeping in mind we want to be warmer next Winter. One option was going up through Greece and crossing over to the southern part if Italy, then heading down through Sicily, Sardinia, Malta, eventually arriving in north Africa in Tunisia. We've heard nothing but good about the Tunisian coast and the marinas there. Prices are way less than southern Europe, and even lower than Turkey, which we thought was a good value already.
The way we decided to go however, is keep heading East along the coast of Turkey, past Antalya, down to Cyprus, and make the crossing to Israel. We all really wanted to spend some time in Israel and figured we might never be this far east. After Israel, we might head down to Egypt, through the Suez canal and spend some time in the Red Sea. That end of the plan is still to be determined. A lot depends on visas, time we're allowed to stay, and so on. Our schedule is sometimes dictated by visas, which is frustrating, but a necessary concern in this lifestyle. Other cruisers are invaluable in getting advice, tricks, and procedures for renewing visas, how and where to do it, practical advice type stuff.
So that's where we're at for now and the plans we have today! We're continually trusting the Lord for His hand to guide and direct and are really excited to see when He directs things and make it obvious to us! We are humble that He would speak to us and be willing to use us in some way.
Drop a line, talk to you soon!
Hems.
1 comment:

So my mother is always pushing me to do two things: bake more and
write more. But before I keep going let me explain a few things ;)
One of the many things i enjoy in life is baking. i love being in the
kitchen, mixing and creating. Especially sweet things! Since we have
been on the boat I have given a lot of thought to possibly going to a
Patissrie School (Thats just a fancy way of saying sugar-y things!). I
was excited to find out they have whole schools full of poeple who
have a sweet tooth as big as mine!
Now the writing... Mom is always...encouraging me to do more writing.
However my reply is always the same "my hand hurts after like 10
minutes!" The answer is lame I know. But I figure if I type on the
computer maybe my hand won't hurt after 10 minutes ;) So here the
writing part goes...

Now my mom has given me the wonderful idea of combining the two. She has asked I write (well, type!) something small about one item that
I've baked that week. The "baked item" could be anything from our
Sabbath Challah to a Carrot Cake I baked last week-end. (No there's none left! Sorry!)

All that to say, I hope you'll be back to hear my weekly ramblings
about my times in the kithen....now if only I had a name to call this
weekly rambles...........any suggestions?

Hello!
We're tired from 3 very busy days in Istanbul......we fit in a lot of stuff!
Day one: Or should I say night one! Levi, Maggie, pops and I went down to "the" place to be at night, Taksim. It's several miles of restaurants, clubs, stores, shopping, all bustling.....even at 2:00 am! The kids liked seeing the full streets and we all had fun eating and drinking Turkish chai in the middle of the night. We learned quickly to negotiate with ALL cab drivers as Rachel and I had been dropped off as soon as we'd arrived, straight off the ferry, to a spot a mile from our hotel with the 3 little ones. Not happy :( Thankfully the other cab with grammy and gramps went to the right hotel and were waiting for us when we finally got there.

Day two: Started out with breakfast at the hotel. Typical Turkish breakfast of hard boiled egg, toast, cucumber, olives, cheese and sausage, and of course tea! We bundled up and headed into the rain, and managed to see some of the sights before the little ones were wet and went back to the hotel for a hot bath. We saw the famous Blue Mosque, absolutely huge and impressive, then split up and the older kids and G&G and I went to Agia Sophia, originally a church started by Constantine in 365 AD, and changed to a mosque by Mehmet the Conqueror in mid 1400's. Now it's a museum and it's most recent guest was none other than our new president, Obama just last year. Although the churches and mosques are amazing, I can't help but wonder if it is religions' attempts to reach God. It all seems to me a sort of 'tower of Babel': man trying to reach God or impress God. I wonder what God thinks as he looks at all of our efforts? I'm reminded of when King David said of God: I don't desire sacrifice, but obedience.
Later that night, G&G surprised us with an early 20th anniversary gift and the four of us went to see a show of Whiling Dervishes. Very unique. It lasted a little over an hour and was accompanied by traditional music from the region. After, we found a restaurant and had a delicious meal of Turkish food and ended the night with baklava, fantastic! 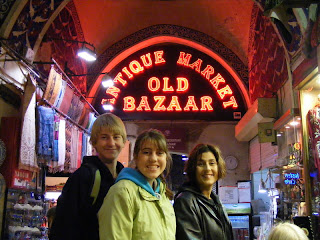 Day three: We went to the Grand Bazaar, an amazing place with 4,000 stores in a huge indoor building spreading out over several kilometers. It's easily the largest and oldest market/bazaar in the world and is really overwhelming! we bargained for carpets, drank lots of free tea, watched gold deals go down for hundreds of thousands of dollars and saw some facinating antiques stores, calligraphy stalls, silversmiths, jewelry dealers, on and on and on! We walked from there in some bitter wind down a long roadway full of clothing stores heading to what's known as the Egyptian Spice Bazaar. It's from the mid 1600's when all the spices from Africa and Cairo came into Istanbul and eventually all through Europe. They are still a huge import/export area even today.

Day four: We called and met with a Turkish Dr. friend we'd met when we first came to Turkey in September, her name is Ada Qok. She met us at the hotel and we all went to a restaurant on the bridge overlooking the Bosphorus River. There is a road above and about 200 people fishing off the bridge. It was a beautiful setting. She helped us negotiate a deal and we all ate fresh fish plates of Sea Bass and Bream, fried Hamsi fish (a sort of sardine) from the Black Sea and piles of baked bread, salad, and cold sliced fruit plates. They also had walnut filled figs soaked in honey, delicious. After we said goodbye, we wandered around a bit and headed back to the hotel and rest up before our ferry back across the Sea of Marmara to the town of Bandirma where we left the car. We're hoping to make it back towards Izmir tonight, making our way to Marmaris tomorrow night.
Bye for now,
Tired in Istanbul,
Hems
No comments: