This week is Purim!!!
The tradition here is to dress up for the holiday. Its started with the Biblical story of Esther.  I think people began dressing up for the holiday as one of the main character of the story (Mordecai, Haman, or Esther) and over the years it has become a time of dressing up as anything you wants to be.......It's a lot like Halloween in the United States.
As you walk through the streets of Jerusalem, everywhere you look, there seems to be people dressed up. We had a dress up party with all our friends from church and stayed out til 1 in the morning! All the creativity of each costume was amazing!! I made an album of costumes from that night as well as other ones I've seen around Jerusalem. Enjoy the pictures!
Levi, Emma, Carolina, Lily, Zoe, Becki, Tom, Josh, Rachael, Abbey, Deborah, Anni, Tirza.........All of your costumes were great you guys!!! :) You guys are so much fun!! :)
Next year in Jerusalem! (Hopefully!!)
-Maggie :)
1 comment: 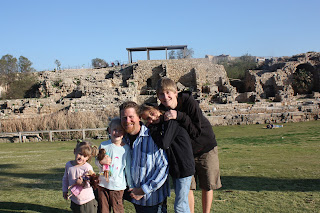 A couple of weeks ago, we were able to visit the ancient shipping port of Ceserea. It is an ancient port build by Herod during the early years BC(22BC+/-), as he was sent to "control" a far corner of the Roman Empire. He was eager to make an impression that he had things under control and wanted to show off by tackling some huge architectual projects. He even named it Ceserea to "brown nose" Julius Cesar who was controlling Rome at that time. 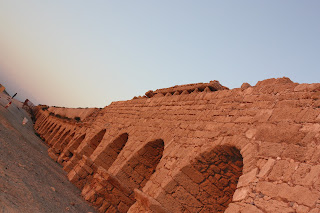 Of these, Ceserea was one of the most ambitious projects along the ocean anywhere in the world at that time. Not only did they construct a huge man-made harbor, which included sinking pilings as a breakwater wall against the storms (even to this day, most are still visible, although sunk from earthquakes) but also had a large city built on the sea and built a massive aqueduct along 13 Km of shore line up to a fresh water spring toward Haifa.

The park is really an incredible sight, it is well preserved and restored, laid out nice, and for us cost-conscious boaters, FREE! An extra bonus! We had a great afternoon exploring and just hanging out in the salt air, the highlight was playing at the beach as the sun slipped behind the horizon, pretty fantastic day!

Hi! This is Levi,
For the past week we have been traveling around with our good friends Larry and Toni Sullins. One of the places we went to was Masada, which is located near the Dead Sea. 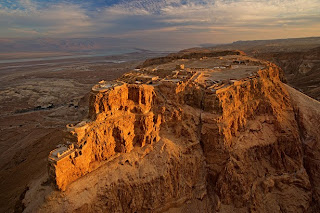 Masada was first built by the Hasmonean king Alexander Janaeus (103-76 BCE.)which is approximately 650 meters long and 300 meters wide. In 37 BCE a man named Herod ruled over Israel and  knew that Masada had a geological advantage located in the mountains!! It could be used as a strong hold. so he took this place as a winter home and as a strong hold against his enemies,he had luxurious palaces built as well as store rooms , cisterns, and a casemate wall. Herod died in 4BCE. And in 66 CE a revolt began between the Jews and the Roman empire. Israeli rebels seized Masada and made it a fortress for all Jews who needed refuge. in 73 or 74 CE. The Roman tenth legion was ordered to take Masada from the rebels, but this was not an easy task. the romans began to build a huge ramp of dirt and reach the people that way. After a few months of surviving on top of the mountain, Eleazar Ben Yair ( a leader of the Jews) gave a speech in which he suggested it would be better to take their own lives rather than become prisoners of the  Romans, so by the time the romans got to the top of the mountain, everyone was dead except for a woman and five children that told the romans what had happened.. :( 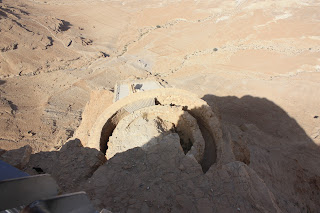 since we started out on our sailing adventure we have seen tons of old cities, ruins, caves, grave sites and so much more. Even though Masada was another city in ruins, it was truly amazing!!! We took a cable car up to the mountain top, and hiked around for about 4 hours, it was a lot of walking... :)
After we hiked around we took another cable car down the mountain. The weather was not to bad, around 80 to 85, hot but still bearable and quite enjoyable. :)
After we got down from Masada we went to the restaurant in the main area, and had a full Israeli meal, Falafel, Pita and Hummus bread, salads, and Juice smoothies!!! (accompanied with Classic Coke Cola. :))
Thanks for the amazing visit Larry and Toni we love you guys.. :)
Levi
1 comment:

Henna with the girls!

Henna is a plant commonly found in Africa, the Middle East and India, and is used to stain hair, skin and cloth. The scientific name for it is: Lawsonia Inermis.  When the powder is mixed into a paste and applied it darkens the pigment but does not chemically alter it. It is a temporary stain, and will eventually fade out of your hair.  You must however use a PURE Henna and not one that has chemicals added to it.There is much debate about using it on the internet. I have added some links at the bottom of this blog if you want to do more reading about it.  Since we have been traveling on this side of the world, Henna is commonly found and very inexpensive. You can find it at any market in the spice section.  You simply buy it by the kilo or the gram. 1 kilo here in Israel is about 10 Shekels...which is about $3.50.

Maggie and I have been using it and we love it!!  One of my "boating" friends,  Tanya,  that I met in Turkey, has done quite a bit a traveling in the Middle East and uses Henna often.  She helped Maggie and I.  (Actually Maggie got to be the guinea pig). The process is quite messy, long, and smells like you are applying chicken feed onto your head but natural and very healthy for your hair. I feel good about letting Maggie put a natural dye on her hair at her age and it is fun to have a "girl thing" between me and her. Speaking of....I am about ready for some more Henna:)
Rachel :)
http://www.wisegeek.com/what-is-henna.htm
http://www.hennaforhair.com/faq/index.html
No comments:

Lily(6) has been drawing more...(I think she want to see her art up on the blog:) As we are getting ready to start our sailing season, we were thinking back to all the places we saw last sailing season.  I like to reflect on the things we have done and the places we have been with my kids.  I not only think it is important at her age, but also as believers.  If we are only looking at the "now" and the "tomorrow" how can we remember all the wonderful things God has already allowed us to experience and brought us through? 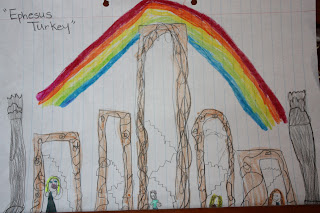 So.......After asking Lily what some of her favorite things about Turkey were....she seemed to remember hiking and climbing a lot on rocks..(ruins). You know,  2000 year old rocks!  Anyway,  she did remember Ephesus as a highlight.  We were able to visit there two times.  The first as a family, and then again with Erik's parents.  The thing Lily remembered the most is that it was John's (Gramps') birthday when we went. I don't know if you know this about Lily but she has a small obsession with any type of party or birthdays.  She is usually planning hers about 6 months ahead.   We secretly bought a chocolate cake and "mushed" it into a back-pack.  We then hiked an hour or so until we got to the best part of the city..The Library.  Then when John was distracted we took the cake out, which was now mushed and destroyed, put candles onto the chocolate pile and sang "Happy Birthday" to our Gramps. (Of course, with the "special birthday crown")  We had a crowd of tourists smiling at us as we had a party.  We then quickly devoured the cake.  No one seemed to mind that it looked like it was stepped on:) It was a great memory, a birthday party in a 2000 year old Biblical city!  Thanks John for having your Birthday with us.  We love you!  So this picture is for you :)