We knew we were only staying in Jordan one night and wanted to try and arrange to stay with a Bedouin family in a tent. We had heard this was possible and looked into it a bit online before we left, but didn't exactly have an email address when we left. And after a few phone calls with the taxi driver at the border, we were off to Wadi Rom, an area in the middle of the desert about an hour away.
We learned that the Bedouin people are nomadic shepherds of sheep, goats and camels and throughout all the arab countries in the middle east, there are basically 3 large families of Bedouin who have been grazing these deserts for thousands of years. 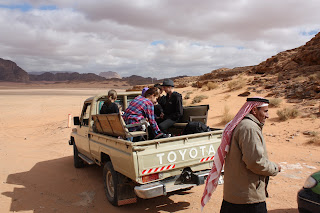 We were met on the road by a Bedouin man and his 'taxi', we threw our 3 backpacks in and were off across the desert. We made a pitstop in his house where we drank tea and met up with another group of 4 college students from the US who were going to the camp as well. Then all of us got back in the jeeps and headed out to
the tent. It was amazing. The whole experience was off the chart and we kept looking around and telling each other, 'can you believe where we are?' The girls were excited about everything, and were exploring around the camp. 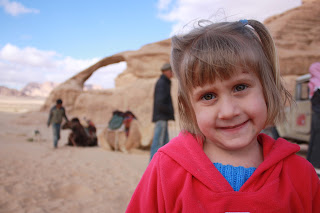 After we got settled (and had more tea!) we went for a 3 hour jeep ride through the desert. There we no roads, we just relaxed and were chauffered around some enormous rock walls and canyons by our 13 year old driver. We got to see some rock carvings, rock bridges, camels, and of course, had a flat tire. No worries, after a call to AAA roadside assist, we were back on the sand. 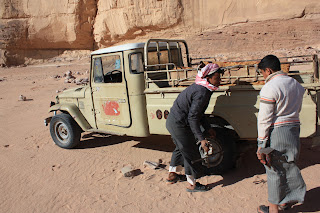 At sunset, we made our way back to the camp and by now we were all starving. None of us had eaten anything (we could take no food across the border) since the yogurt 12 hours earlier and it had been a long day. The kids were all troopers and minimal complaints, but were quite ready to eat!
They made BBQ chicken on the fire pit inside the tent and we ate it with wild rice, homemade pitas and camel yogurt. It was delicious (even the camel yogurt, after you pick the hairs out, it's very nutritious)
So, after some more tea, and more tea, and a lousy night's sleep the night before, we were ready for bed! We stoked the fire with big pieces of charcoal, and got into our 'beds' after running outside in the pitch blackness to stare at the night sky. It was like being on the boat for overnight passages: billions of twinkles and constellations from horizon to horizon, and absolutely dead quiet. Amazing doesn't even begin to describe that feeling of insignificance!


We snuggled into our beds and were very soon dead to the world. Overall, it was an experience we'll never forget and we were very glad we'd done it. More pics on the link on the right.


Tomorrow, off to Petra!!

Absolutely breathtaking! You are all living the ultime lives Hemingways!

John and Mary from CR