The Gambia - Back from the River

Well, we made it 'back' to civilization.....as much as Banjul, the capital of The Gambia can be considered civilization, but much more modern than the middle of the jungle on the river.

We stopped at James Island, which is towarde the front of the river, and it is famous for being the spot where Kunta Kinte from Root's was taken as a slave to America. It has some old fort walls and it was really sad to imagine slaves waiting there, full of fear in leaving their homeland, off to a totally stange place and life. 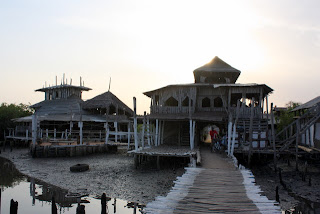 From there, we went and anchored up a small stream near another "famous", but more modern place, Lamin Lodge. It is run by a German man named Peter who came in 1982 and has established a few lodges up the river. He is well known throughout the river and he has lots of local friends he has met and helped over the years. He was super nice and patient with us and, although people are constantly wanting his attention for something or another, took the time and sat with Levi and Lily and I and talked us through the river trip and the area, and as an old sailor, was full of cool stories from his decades of experience. One of those cool folks you get to meet in far off places, who make the place seem even mopre epic. We had a great dinner at the lodge, Chicken Yassa, and extremely cold beer, which after some hot dry days on the river, was very welcome! 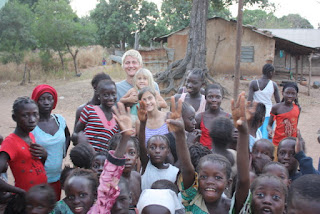 We spent a day in the capital, Banjul, finding some provisions, milk, bread, fruit and the essentials, and had a great lunch at the French Alliance International, a product from the French government. They are located around the world and promote French language and all things French. They had a great cafe, super cheap local food, and we found out that there was a band playing that night starting at 9 pm.

Evern though we were pretty beat, we walked the 2 miles back into town and found a bus to take us to the concert. It didn't start right at 9, but not until after 10.....and we didn't get back to the boats until 2 am! It was lots of fun, hanging out with our friends on "Begonia", Sebastian and Carla, and their crew member, Juliano from Brazil. The music was awesome and even though it made the next day extra long.....it was well worth it!

So, after another day of cleaning the boat and swimming in the river, we are ready to head toward the Cape Verde Islands. They are 500 miles away, and a pretty popular spot for sailors to stop on their way across the Atlantic to the Caribbean. The most Western part of Africa and along with the Azore Islands, located in their own time zone.

See you in the Capo Verds!

What a great picture, I see Lilly peaking through the croud.