Last week, Israel had one of the worst storms on record. We were spending 2 weeks at the boat in the marina, winterizing and cleaning the boat until next spring. We had one or two days of wind during the first week, but it quickly left and returned to an unseasonably beautiful December. We actually spent a few days walking to the beach and swimming. Levi spent a day snorkeling outside the breakwater trying some new fins. 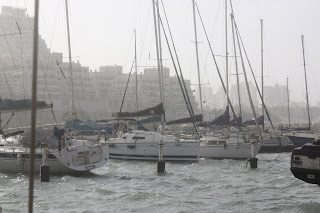 The next storm, however, was HUGE! It was predicted 5-6 days in advance, and didn't diminish as it got closer, only stronger. We were watching it approach from Sicily and as it passed through the Greek islands, it just kept growing. We watch weather sites like: www.windguru.com and www.passageweather.com which both offer a lo t of information specifically for sailors. So, as it blew in Friday night (12-10), we knew it was big. The dust in the air from the Negev desert to the south was amazing. Visibility was terrible and everything was covered in dirt. All day Saturday the wind howled through the lines and rigging in the marina. We had moved Mehari to an inside pontoon before the storm, but spent the next 3 days rollin' around in the boat. Inside, it was nice and cozy and we watched movies, occasionally checking on the lines and wind strength. I never saw the winds blow less than 30 knots for 48 hours. Levi saw 51 knots and another boat recorded 60 knots during the worst Sunday morning around 4 am, while it was dumping rain.  I was awake, looking and checking and could definitely tell it had gotten heavier. There is a different noise the wind makes through the rigging between 40 knots and 60 knots!! The pitch climbs higher and higher, then cuts out to a low hum, almost growl, as the wind makes good on all the threats its been breathing the previous days. 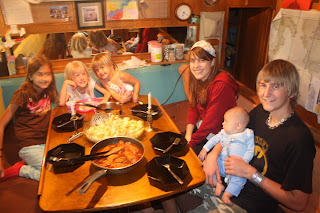 Over all, we felt safe in the marina, really glad we weren't out in the Med, as a huge tanker ship ended up sinking and two other vessels had to be pulled to safety with tugboats into Ashdod, just 7 miles up the coast. We had heard buildings collapsed in Egypt from the winds and the Suez Canal was even closed, not a small storm! An ancient marina, built by Herod's son in Ceserea 30 miles away, was destroyed, as well as a lot of damage in other marinas up the coast (Ashdod, Tel Aviv, even Lebanon and Syria) So, it's safe to say this was the worst storm in 2000 years ~ at least that's my logic :)
The biggest challenge we had was keeping the two boats upwind from us off of our boat. The mono-hull next to us is a heavy 42' boat outfitted for circumnavigation. They had two dock-lines on the stern and one had broke and the other frayed badly. The boat next to him only had one dock line and it was frayed! Both boats were empty and Levi and I spent a lot of time tying additional dock-lines and Levi got the "joy" of jumping in the ocean while all this was blowing and tie lines on steel posts for additional support! I think deep down, after he showered, he loved it ;)
All in all, after it was over, we were wobbly and full of coffee, but safe. We were glad to be there and keep an eye on things, especially our 'neighbors' boats. Nothing fells as good or shines as brightly as the sun after the storm!  We almost had fun cleaning the decks and stowing lines and washing putting things away on Monday!
That's it for now, this week, we head beck to Jerusalem to a different apartment for the winter, we'll update soon!
~ waterlogged Hems